To Goa, with Vodafone love 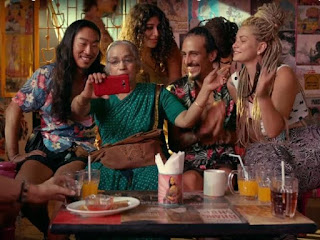 Clients think showing older people in ads isn’t aspirational. But that’s hardly the case!
I have always been an admirer of Vodafone India’s advertising, even if I am not a great fan of its network or service. Have you seen the new campaign that features an old couple going to Goa on their second honeymoon?

I have seen three ads - and perhaps there are more — featuring a South Indian couple who are (probably) sent on a holiday to Goa by their children and grandchildren. The ads feature a smart couple, probably in their sixties, going to Goa after 35 years, and their experiences, all of which are captured through the mobile services of Vodafone.

One of the most refreshing aspects of the commercials is the choice of models — a couple that could easily have been your uncle and auntie - cheerful, modern and completely at ease with their accent! Often, a touch of realism and characters who don’t look and act like models, can create a huge difference from the often phony, superficial stuff that most commercials subject us to.
But, about the communication...

The couple lands in a Goa railway station and is searching for the cab driver who is supposed to pick them up.

They do a video call with their daughter perhaps, who asks them to look for “a guy with a ponytail”. And our uncle promptly asks “ponytailaa?”, leaving the audience with no doubts as to his State of origin! Thanks to Vodafone and its service, they locate the driver and go off to the resort in a cab, with the driver asking them if it is their first trip to Goa.

Whilst this commercial is probably the weakest of the three, it establishes the central characters and their presence in Goa. We also get a sense that they are going to be there for some time, going to do some crazy things!
Hiring a scooter and zipping off…
The next commercial features the couple asking for directions to the “Dil Chahta Hai Fort”. And zillion bystanders give conflicting directions! A consumer knows all too well about Indians who are so well meaning that they will give you directions, even if they don’t know! You can only admire their desire to help.

Again, one’s attention is drawn to the detailing of the models, who give you a local flavour. It reminds you of numerous trips when you were taken for a ride by well-meaning people who gave faulty directions! The Uncle, realising that he is going nowhere with all the ‘help’ logs on to Google maps and takes off with his saree-clad mami in the pillion, secure in the knowledge that Google maps is there, working seamlessly with the strong Vodafone connect.
Mama gets a tattoo

The third commercial shows mami receiving a video call while she is having a ball with her new-found friends, some of whom have zany ponytails. When they ask where their dad is, we find mama proudly getting a tattoo with the name ‘Asha’ inked on it! This is arguably the cutest commercial, as it shows an old couple cheerfully going with the flow of the moment and doing things that are usually associated with younger people.

A culture of creativity
Brands that are stand-outs in advertising usually set benchmarks for creativity that others strive to achieve. Vodafone, with its girl and the pug dog, and the zoozoos, has consistently created highly watchable ads.

I am not sure if the current ads will match up to the earlier ones in terms of creativity and recall, but it is certainly something that customers like me have noticed. All too often, clients and agencies think that showing older people in advertising puts off younger people and is not aspirational. Hardly! People will gladly watch advertising as long as it beats the clutter.

They will remember advertising if it has memorable characters, irrespective of their age. Today, more and more middle-aged and older people are living life to the fullest, refusing to get stereotyped. And the current Vodafone campaign is really a recognition of this trend.
Remember, the best advertising reflects the times we live in. And we certainly live in interesting and exciting times!